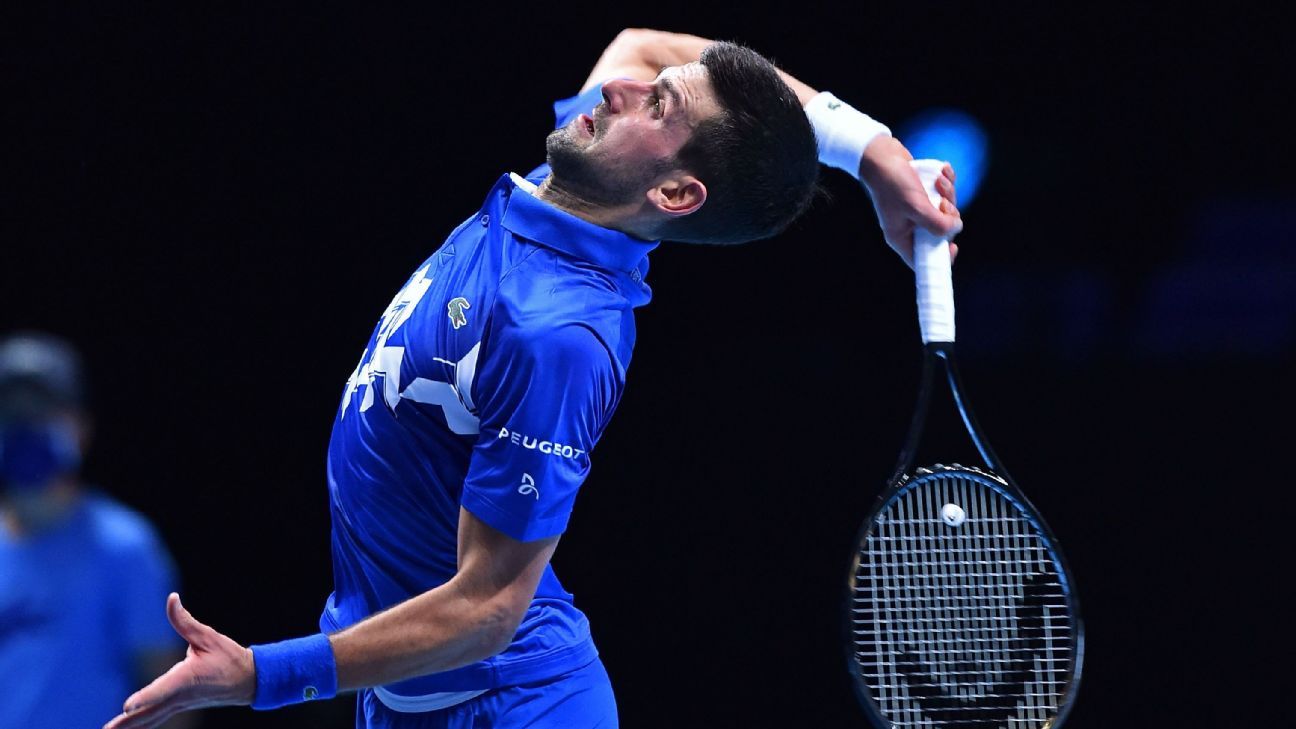 LONDON — Daniil Medvedev pulled off an underarm serve as he outlasted Alexander Zverev and joined Novak Djokovic as a winner Monday on day two at the ATP Finals.

Djokovic and Medvedev meet Wednesday to secure the group lead.

Medvedev led 4-3, 30-30 in the second set when he surprised Zverev with a quick underarm serve. It brought the German to the net, and he lost the point when his backhand block volley flew long.

“My wide serve was not working as well as I would like, and he was returning good,” Medvedev said. “I see that he was five meters behind the baseline, and I have the ball close to my racket, so I thought, ‘Go for it.’

Two games later, he served a love game to earn his first win at the ATP Finals in his fourth match, going back to last year.

Medvedev went 0-3 in his first Finals, including a loss to Zverev that he avenged after an attritional opening set.

Zverev, the 2018 champion, earned a break in the first game but gave it straight back with three double faults. Another double fault by Zverev in the sixth game gave Medvedev a 4-2 lead, and the Russian finished the set with his first ace.

A weak forehand into the net cost Zverev the decisive break at 3-3 in the second. Medvedev held with the underarm serve, and he beat Zverev again eight days after winning their Paris Masters final.

“This was one of the most [intense matches] I had in my career,” Medvedev said.

The top-ranked Djokovic smothered Schwartzman after conceding an early break, and despite having no fans inside the 20,000-capacity O2 Arena, he gestured to each section as if to say thanks.

“Why I celebrated? Because that’s my celebration, and that’s also my gratitude to the court and to this opportunity to be able to compete,” Djokovic said. “Even though there was no crowd in the stands, I know that there was a lot of people watching it on TV, so that was me sharing that emotion with them.”

Djokovic hasn’t lost an opening ATP Finals match since 2007 against David Ferrer. He has never lost to Schwartzman in six matches.

“It felt like a practice session in a way,” Djokovic said of playing in the empty stadium. “This has been one of the most exciting arenas to play for a tennis player. The atmosphere was always electric, and the crowd was always loud and really into matches.”

He has won the elite, season-ending event five times — one short of Roger Federer‘s record.

Schwartzman qualified for his first ATP Finals by reaching the French Open semifinals and two finals, including at the Italian Open, in which he lost to Djokovic.

“That start of the match, he was not playing his best,” Schwartzman said. “I took the chance at the beginning, but then that break back from him … I did too many mistakes.”

The ATP Finals move to Turin, Italy, next year, after 12 years in London.

The players’ hotel is a short walk away, but health protocols require that they be driven to and from the venue.

The tournament is using electronic line calling for the first time. Players can’t challenge whether a ball was in or out, but they can request a video review for other disputed situations, such as double bounces.

Djokovic on Sunday was presented with a trophy for finishing the year with the No. 1 ranking for a record-equaling sixth time.