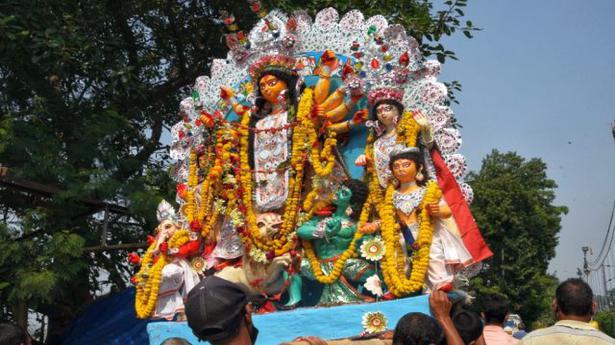 Elaborate arrangements were made at the 21 ghats in Kolkata, where hundreds of idols were immersed in the river Hooghly

A low-key immersion of idols on Monday marked the end of week-long Durga Puja festival in West Bengal that was held amidst the COVID-19 pandemic under extreme caution. No immersion procession was allowed at the ghats and only one or two members of the Durga Puja committee was allowed to go to the river.

Elaborate arrangements were made at the 21 ghats in the city, where hundreds of idols were immersed in the river Hooghly. Chairman of Board of Administrators of Kolkata Municipal Corporation Firhad Hakim said the civic body was following the restrictions both due to the COVID-19 pandemic and the order of the National Green Tribunal on immersion of idols.

Cranes were used at major ghats to extricate the immersed idols. The State Transport Department has commissioned a jetty so that people can watch the immersion from the river. There was low-key immersion in the other rivers and water bodies of the State, including Ichamati, where people on both banks — India and Bangladesh — come in boats to witness the immersion.

Mr. Hakim said that most of the immersions in the city would be over by Tuesday and only a few big-ticket Pujas would be left. The size of Durga idols were smaller this year and environmentalist say that it is good news for the river as the pollution will be under control.

The festival saw few people on the streets in Kolkata and other towns as the Calcutta High Court had ordered that all Puja pandals would be no entry zones.