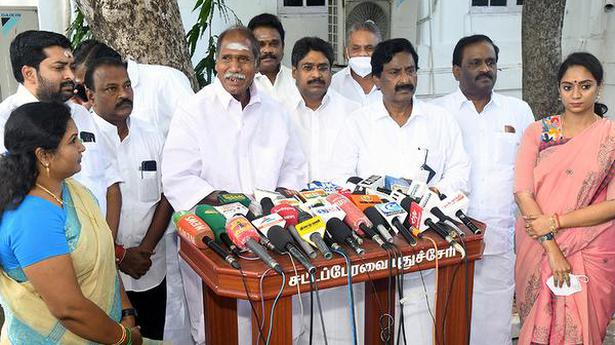 Puducherry Opposition leader and chief of AINRC N. Rangasamy on Monday charged that Chief Minister V. Narayanasamy was trying to put the blame on the Lt. Governor and Opposition parties to hide his government’s “failures.”

Speaking to reporters at the Assembly after boycotting the session along with AIADMK members, the former Chief Minister said the government was not able to deliver on its promises or implement development programmes. “Ours is a small territory with different power structure. You should know how to govern within the limits considering the welfare of the people. There is no point in blaming others for the failures,” he said.

Questioning the unity within the Cabinet, the AINRC chief said there are reports about a Minister leaving the ruling party soon and another Minister already having submitted the resignation.

He also questioned the necessity to adopt a resolution seeking Statehood during the fag end of the tenure of the government.

AIADMK floor leader A. Anbalagan, who was also present at the media interaction, said the Chief Minister himself should come forward to prove his majority. “We will not bring any no confidence motion to avoid ruling party getting any sympathy,” he said.

Two nominated legislators belonging to the BJP though attended the first few minutes of the session staged a walk out after Speaker V.P. Sivakolandhu read out the obituary references.