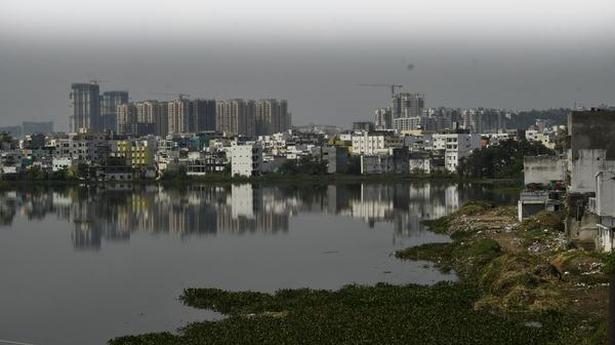 Nature is not elected government. Pandering to public demand is not its mandate, as could be seen from the repeated spells of urban wrecking which have become an expected phenomenon every now and then. Fall in line with utmost speed or perish, is the warning note being left behind every so often, but measures in that direction fall woefully short of the desired result.

Several reports and recommendations since the devastating floods in 2000 are lying unimplemented, and projects taken up by the government towards this direction are moving at snail’s pace, but the encroachment of water bodies and stormwater drains with impunity is proceeding at alarming pace. Activists point to the areas where very recent encroachments have obstructed the water flow, which led to inundation during the latest spate of floods.

“Between 2014, and 2020, encroachments have been made on lake beds at extraordinary pace. Gurram Cheruvu, Sunnam Cheruvu, Palle Cheruvu, APPA Cheruvu… you name it. Several areas are under water, and the government is doing precious little to salvage the situation. I have made some 200 representations to the government over various violations, but received no response to even one,” fumes activist and Telangana State General Secretary of Socialist Party (India) Lubna Sarwat.

M. Srinivas, city secretary of CPI(M), notes that APPA Cheruvu in Gaganpahad has been reduced to four acres from its original spread of 14 acres. “The development has been very recent. The area is occupied by industries and commercial establishments,” he says. Same is the fate of Palle Cheruvu in Mailardevpally and Gurram Cheruvu near Chandrayangutta.

Strangely, the APPA Cheruvu, which was the reason behind the flooding of Hyderabad-Bengaluru highway, is not even notified by the HMDA despite its discovery way back in 2014 by NGO Save Our Urban Lakes. Google’s historic imagery shows that the lake was encroached only recently between 2018 and 2020.

The Lake Protection Committee under HMDA has so far identified a total of 3,132 lakes in its purview, but issued preliminary notification for only about 2,000 of them. Final notification has been issued only for 224.

Ms.Sarwat claims that even in the notified lakes, the authorities have reduced the FTL limits to suit the fancies of a few influential encroachers, and condoned illegal constructions inside the limits. For instance, an FTL stone of the Saroornagar lake which has inundated area up to Dilsukhnagar, is found to be in the Singareni Officers’ Colony!

Besides encroachment of the full tank level (FTL) of lakes, the hydrological chain links — water channels connecting one lake with the other, and finally to Musi river — too have been tampered with and occupied, leading to calamitous consequences when it rains copiously. Town Planning is hardly a matter paid heed to, and indiscriminate permissions for layouts and illegal layouts have wrecked the natural topography of several areas.

Anant Maringanti, another climate activist and founder-executive director of Hyderabad Urban Labs, says, the Town Planning wing lacks teeth in Hyderabad, when compared to those in cities such as Chennai, Mumbai and Kolkata. “The planning body here has no power at all. It has no money, no capacity to do anything. It doesn’t have manpower, nor regulatory authority,” he says.

Urban planners who should obtain information about the significance of any area’s natural terrain and the land use from the Revenue department, actually get only the information about cadastral survey of properties. Mr. Maringanti suggests establishment of a Land Commission through HMDA, which will pore deeply over the current status, and arrive at long lasting solutions for turning the urban agglomeration into a ‘sponge city’.